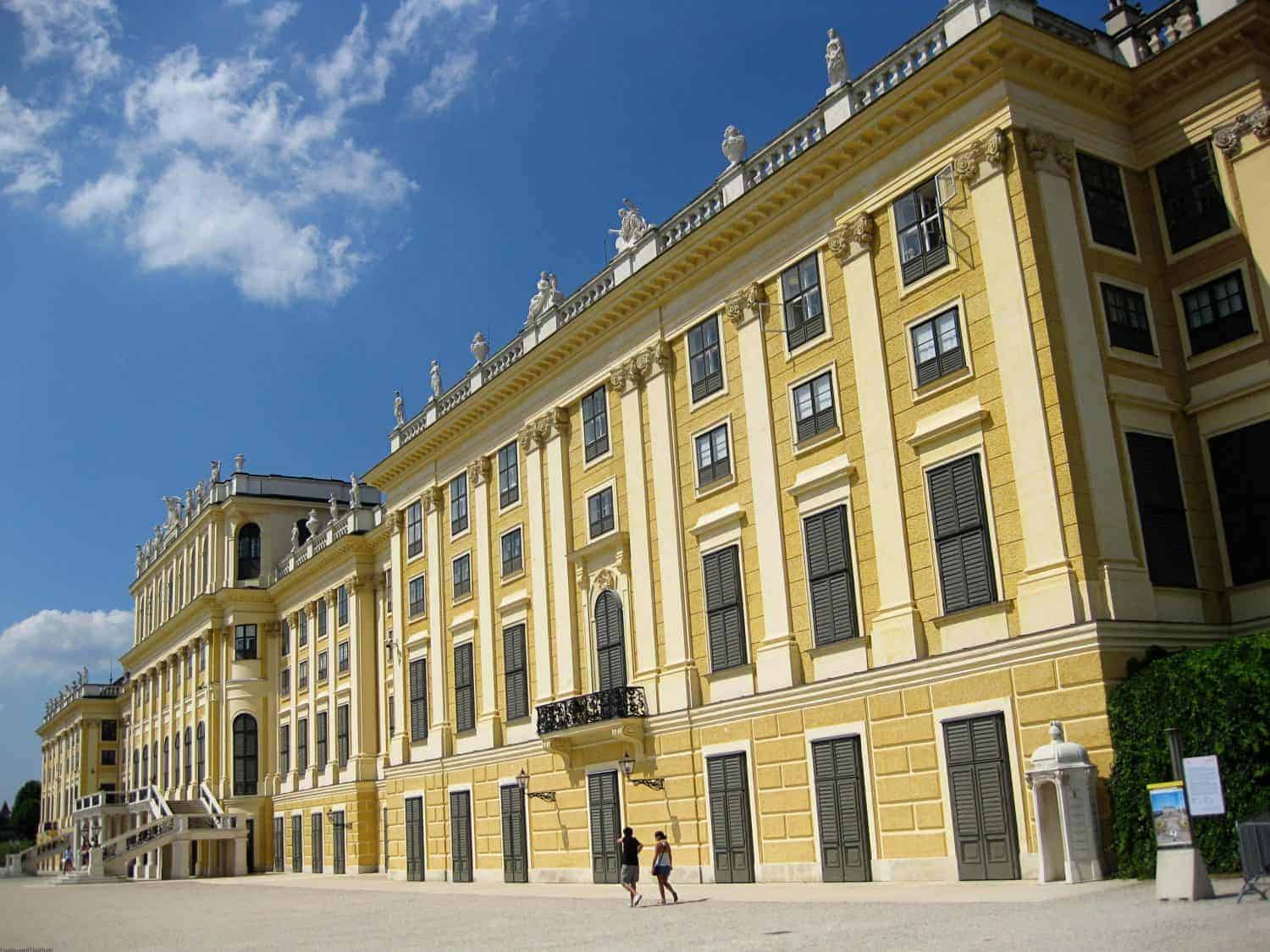 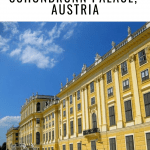 When travelling through Austria’s capital city Vienna, one attraction well worth a visit is the stunning Schonbrunn Palace. This was one of our favourite places to visit in Vienna and remains one of my favourite castles in the world!

A VISITORS GUIDE TO SCHONBRUNN PALACE

We were lucky enough to visit the Vienna Palace back in during our second European holiday.

We had only a couple of hours to spend on the Palace grounds, as we were travelling as part of a guided tour during this trip and limited by what time we were given at each attraction, however, this was more than enough time to fall in love with the Palace and add it to the list of places I would love to revisit.

Schonbrunn was commissioned to be built in the late 17th century by Emperor Leopold I, taking approximately half a century before construction was completed. The Palace is a former imperial summer residence, which seems fitting with the glorious yellow exterior. It feels like sunshine!

From the 18th century to 1918, Schönbrunn Palace was the residence of the Habsburg emperors, designed by the architects Johann Bernhard Fischer von Erlach and Nicolaus Pacassi.

With a name meaning ‘beautiful spring’, Schloss Schonbrunn more than lives up to this name with the perfectly manicured gardens surrounding the striking and massive palace building consisting of an impressive 1,441 rooms.

Today, the palace is part of UNESCO’s cultural heritage due to its historic importance, its unique gardens and grounds and the well-maintained and restored furnishings that fill the palace rooms.

At the time of our visit, we were only in Vienna for a couple of nights as part of a 2-week European sampler guided tour.

This was one of the few times we have done a guided tour, and while it was an amazing way to see many countries quickly and easily, there is always that sense of rushing.

This is especially tough when there are places you fall instantly in love with and wish you could spend more time… like Schonbrunn.

Our visit allowed for a tour through the Palace, which only takes you through a small fraction of the 1,441 rooms. There simply would not be enough time to see it all.

During the tour, there is the opportunity to visit some of the most relevant suites and areas, with a list of different tour options on the Schonbrunn Palace website.

You can opt for a self-guided audio tour if you have time to spare, and take as much time as you would like to take in the sights inside the palace.

Alternatively, they offer guided group tours as well, with an expert tour guide who will give you the history of the palace.

Following our palace tour, we had time to stroll through the gardens and get a little lost as they are expansive, to say the least.

The gardens are so well maintained, and it is absolutely lovely walking through them.

Bright coloured flowers, patterned garden beds and perfectly shaped hedges. And like the rest of Vienna, everything is so well pristine and clean. It really is a beautiful city to visit!

Make sure you have a hat and sunscreen on if you are visiting on a warm day because there is very little shade and that sun can have quite a bite! Especially during the summer like during our visit!

The Neptune fountain is also an impressive structure. On the day of our visit, it also looked like a nice place to jump into for a quick cool down as it was a very hot summer day. Don’t worry… we resisted the temptation!

It was refreshing to enjoy the splashes of water from behind the fountain, plus you get an incredible view of the palace and gardens from the platform above Neptune’s Fountain.

Although the best view of all is from the Gloriette. The Gloriette was often used as a dining area for visiting guests, and as such extra structures such as a kitchen were built nearby.

Most of these have since been demolished many years ago, however, the Gloriette itself is an impressive structure if you can find the energy to walk up the hill.

It was hard going on a hot summer day! But worth it for the views and a close up look!

Book your Schonbrunn Palace and Gardens tour tickets and skip the queue.

Extravagant palaces and kids don’t always seem like a great mix! Firstly, you worry the kids will become restless, especially doing a guided tour, and many parents also worry about their kids getting into mischief.

There’s plenty of great stuff to see and do with kids during Schonbrunn Palace opening hours! Especially since the gardens open from 6:30AM!

Aside from the sprawling gardens where there is plenty of space to move around and burn off some kid energy, there are quite a few fun attractions scattered about the grounds too!

Some of these attractions do have admission fees though, so make sure you check the website first for updated pricing and times!

There is Baroque hedge maze in Schönbrunn Palace Park, which would be perfect if travelling with kids for a little extra adventure. The current maze was a redesigned version based on the original created in the 1700s, and it features a viewing platform in the centre.

The labyrinth is a massive play area spanning 2700 square metres, with puzzles and climbing structures, brain teasers and physical challenges aimed at providing fun for the whole family.

Museums aren’t always created with kids in mind, however, your kids will love the Schonbrunn Palace Children’s Museum as it tells history in a way that is fun for kids and they can even dress up like royalty from the days of the Imperial family. They even host children’s birthday parties if you’re a local!

Schonbrunn Palace is also the site of the world’s first zoo in 1752. The zoo remains open and has been named the world’s best on many occasions over the years, including the recent Best Zoo In Europe award.

Unfortunately, we did not have the time available to visit the zoo during our guided tour.

If you are hoping to visit both the Schonbrunn Palace Zoo and the Palace grounds, a full day could easily be spent at Schonbrunn, with enough to do to fill several more hours than we had during our visit.

The zoo, also known as the Tiergarten or the Menagerie, features more than 700 different species of animals in its unique UNESCO world heritage setting. The star attraction is their giant pandas.

Definitely, a place the kids will love visiting… and adults too! Find out more on the website.

There are so many different things to do when visiting the palace and the surrounding areas.

There’s a good chance you won’t fit it all in over a single visit, however, if you do have the chance, be sure to book Schonbrunn Palace concert tickets. One of the most popular regular events that takes place at the palace is their regular concerts.

Austria as a whole is known for beautiful classical concerts and orchestral performances, so why not enjoy one in a setting such as this!

This is another thing we sadly missed the chance to experience however we did hear from others how incredible the concert was!

The Schonbrunn concerts are held in the Orangery where you will have a memorable experience witnessing the palace orchestra.

Is Schonbrunn Worth It?

Overall, Schonbrunn Palace is a historical attraction that is an absolute must on things to see and do in Austria.

Make sure you have Vienna on your list of cities to visit and give yourself at least half a day if you can’t spare a full day, to really make the most of your palace visit.

With any luck you may even be able to visit the zoo, which is something we hope to do one day on a future visit. And the vineyard and the maze and the labyrinth…

We have visited many castles in Europe during our travels, including the exquisite Versailles Palace in Paris, which is known for being one of the best in the world, While both Versailles and Schonbrunn area beautiful and deserve a visit, personally, my favourite is Schonbrunn.

They both offer a chance to step back in history and learn about the rich and noble from days gone. Along with lavish decor and perfectly kept gardens!

For more palace inspiration, check out this huge list we put together full of virtual palace, museum and attraction tours.

Another that is a must-see when you’re in the general area is a trip over the border to Germany and the breathtaking Neuschwanstein Castle.

Located in Vienna in Austria, Schonbrunn Palace is a former imperial residence that is open for tours year round.

Schonbrunn opening hours depend on the time of year and the season. They are currently as follow, however always subject to change:

Schonbrunn Palace tickets and entrance fees depend on the attractions you visit, as there are several attractions on the palace grounds that have their own separate admission fee. However, there are some great bundled prices if you wish to do more than just visit the palace and grounds.

For the most basic palace tour admission, prices start from € 14,20 for adults and € 10,50 for children, as part of the Imperial Tour.

There are several public transport options in Vienna and surrounding cities available that will take you directly to the Palace, including both buses and trains.

You can also find a large range of guided tours, transfers and ticket prices Online.

We recommend the 2 hour private walking tour around Vienna that takes you to Schonbrunn Palace, State Opera House, The Parliament and several other notable sights in this beautiful city.

DO YOU HAVE A FAVOURITE PALACE OR CASTLE YOU HAVE VISITED?