25 Things to See in Brussels… Even If You Only Have 1 Day! 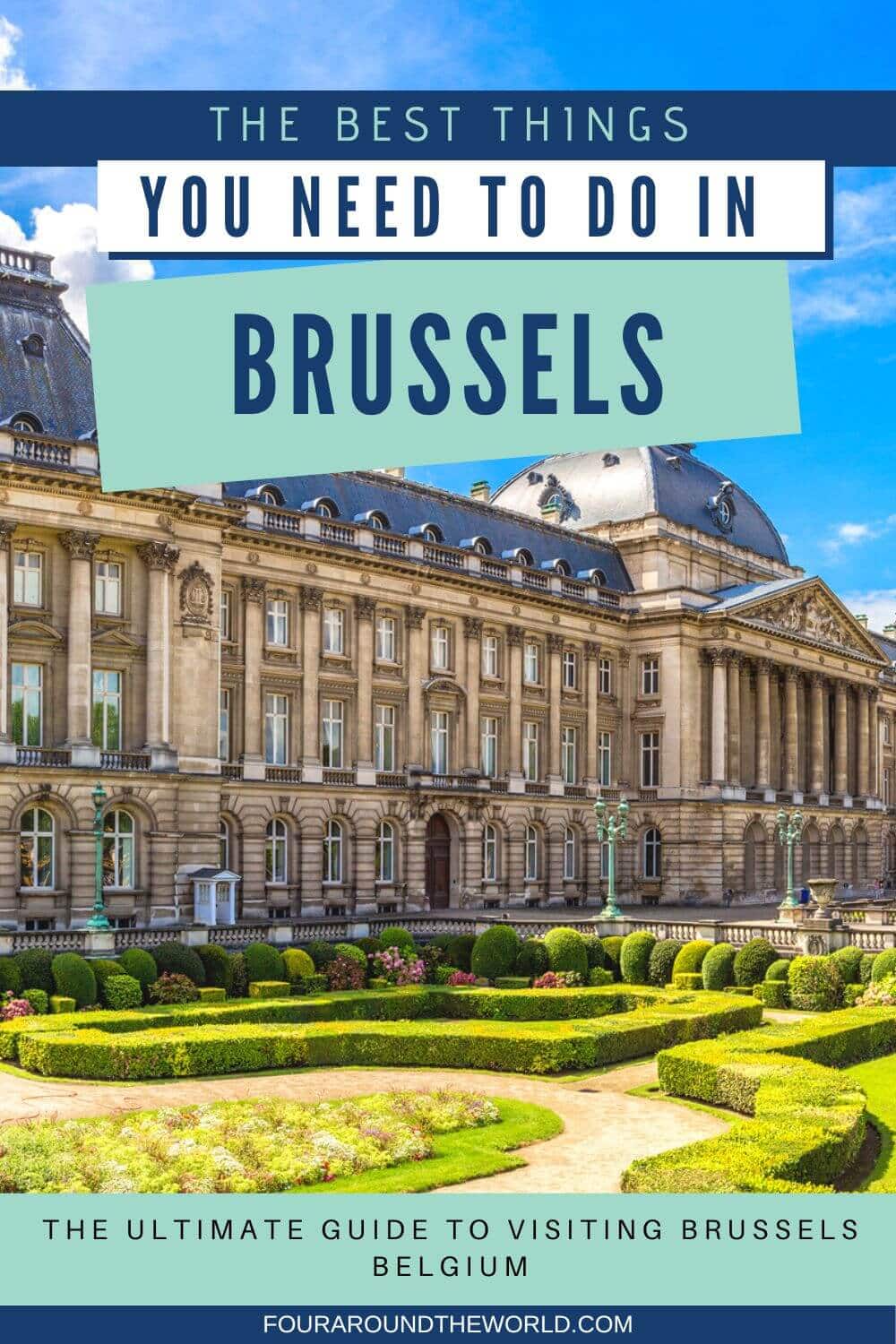 Belgium is a small country with a lot to offer. The capital, Brussels, is home to many of the country’s best sights and attractions. Even if you’re only in Brussels for one day, you can see a lot and make the most of this pretty European city. Plan your visit with the best things to see in Brussels and the attractions you should add to your Brussels itinerary.

Planning Your Visit To Brussels, Belgium

Brussels is a family-friendly city with plenty of things to see and do. It is also easy to get around and explore.

We first visited Brussels for just one night and day during a 2-week guided tour through Europe and it wasn’t nearly enough time to see everything we wanted but enough time to appreciate the beauty of the city.

The best time to visit Brussels is in the spring or fall. The weather is milder and there are fewer tourists. However, if you’re looking for cheaper hotel rates and flights, visiting during the winter months can be a great option.

Like most of Europe, Brussels is a wonderful place to visit during the holidays, with Christmas markets and festivities adding to the magic of the white Christmas vibes.

If visiting in winter, check out our packing guide for Europe in winter.

You can reach the city from either airport by bus, train or taxi.

The best way to get around Brussels is on foot or by public transportation. The city is relatively small and easy to navigate.

There are three main types of public transportation in Brussels: buses, trams, and the metro. Tickets can be purchased at any metro station or from a vending machine at most tram stops.

If you’re planning on doing a lot of sightseeing, it might be worth buying a Brussels Card. The card gives you free access to public transportation and many of the city’s museums and attractions.

Brussels is also the perfect location to take a day trip to many other cities and neighbouring countries so if you plan on taking some day trips from Brussels, a rental car might be your best option!

Where To Stay In Brussels

There are many great hotels and private rentals located throughout Brussels. If you’re looking for a convenient location the best place to stay in Brussels is in the city centre.

Here are the best neighbourhoods to stay in Brussels:

The Best Things To See In Brussels

The Grand Place is the central square of Brussels and one of the most beautiful squares in Europe, surrounded by baroque and gothic-style buildings.

The square is surrounded by guild halls and the city’s Town Hall. The stand-out feature of the Town Hall is the crooked spire that sits 315 feet tall.

The Grand Place is on the UNESCO World Heritage List for Belgium and is one of the top things to do in Brussels in 1 day.

A must-see Brussels attraction if you want to learn all about the city and its history, along with admiring the history of Mannekin Pis’ outfits. The city’s history is told over 3 levels, from the Middle Ages to today.

This famous sculpture of a little boy peeing into a fountain is one of Brussels’ most iconic landmarks. The statue dates back to the 17th century and has been replicated many times. It is also often dressed up in costume!

It is located within the city centre, just 3 blocks from the Grand Place, making it easy to visit both while you are in the area.

The Atomium is a Brussels landmark that was built for Expo ’58, the World’s Fair. The structure is made to represent an atom, with each of its nine spheres representing an atom’s nucleus and electrons.

The Atomium is now a museum and can be reached by metro.

This public park is located in the eastern part of Brussels and is home to many museums, including the Museum of Art and History and the Royal Army Museum. The park also has a beautiful fountain, gardens, and monuments. This park is also home to the Atomium.

The Royal Palace of Brussels is the official palace of the King and Queen of Belgium, where the King of Belgium exercises his authority as Head of State. The palace is open to the public during the summer months, usually from mid to late July through to September.

Brussels is known for its beer, so be sure to visit one of the many breweries while you’re in town. The Cantillon Brewery offers tours and tastings.

Or you can visit the Delirium Café, which has over 2,000 different types of beer! It holds the Guinness World Records for the number of beers available for tasting.

Check out these beer tours and tastings:

Basilica of the Sacred Heart

The fact this is the 5th largest church in the world is impressive and that alone makes it one of the most popular things to see in Brussels. Modelled on the Basilica of Sacre Coeur in Paris, but with concrete, red brick and sandstone instead, giving it an impressive bold appearance.

There is also a viewing platform giving great views of Brussels.

This grand cathedral is built in honour of the male and female patron saints of Brussels and is one of the popular things to see in Brussels.

Although some damage was received during the French shelling in 1695, the bulk of the gothic-style cathedral remains intact.

Other things to see in Brussels if you have more time:

The Best Things To Do In Brussels With Kids

Waffles are a staple of Belgian cuisine, and kids will love them! You can find waffles all over the city, but for the best Belgium waffles, head to Maison Dandoy.

Brussels is known as the comic strip capital of the world. The Comic Strip Centre is a museum dedicated to the history of Belgian comics. It is located in the city centre and is easily accessible by public transportation.

There are many interactive exhibits, making it a great place to take kids.

Short on time? Do the Belgian Comic Strip walk instead and see the cool street art dedicated to many comic book favourites.

The Zoological Garden of Brussels is one of the oldest zoos in Europe. The zoo has over 200 species of animals, as well as a children’s farm, a petting zoo, and a Reptarium.

The Brussels Aquarium is located in the Royal Park of Brussels. The aquarium has over 350 different species of fish, including sharks and stingrays. There is also a tropical rainforest with reptiles and amphibians.

Take A Chocolate Tour Or Workshop

Belgian chocolate is some of the best in the world. Kids will love taking a chocolate tour, where they can learn about how chocolate is made and taste some delicious samples!

Brussels Park is a large public park located in the city centre. The park has a playground, a pond, and plenty of green space to explore.

In the summer, there is an open-air cinema and other fun events for families.

Mini-Europe is a miniature park located in Brussels that has replicas of some of the most famous landmarks in Europe, all shrunk to 1/25th of their actual size. It’s a great place to take kids to learn about different European countries and their history.

Some of the landmarks you can find at Mini-Europe are Big Ben, the Eiffel Tower, and the Colosseum.

Other things to do in Brussels with children:

What To See In Brussels In One Day

If you only have 1 day in Brussels, whether you are stopping in the city overnight during a European road trip or visiting for a day as part of a guided tour, or even taking a one-day day trip from another nearby city, you want to make the most of your short visit.

Here are the best things to do in Brussels in 1 day:

Staying for longer? If you’ve got extra time in Brussels or planning to make it your base for a few days to give you time to explore further, these are some of the best day trips from Brussels (or weekend stays):

This medieval town is located about an hour and a quarter from Brussels by train. Bruges is known for its canals, cobbled streets, and market squares. It is also the capital of West Flanders in northwest Belgium.

Ghent is another medieval port city located near Brussels, just 45 minutes by train. The city is known for beautiful architecture, including Saint Bavo’s Cathedral, and its many canals. It is often referred to as the “Venice of the North”.

Antwerp is around a 45-minute train trip from Brussels. This Belgium city is known for its fashion, diamond industry, and port.

Day trips to other nearby countries:

A day trip to Paris is possible. The high-speed train from Brussels to Paris takes about 1 hour and 30 minutes, giving you enough time to explore some of the most iconic attractions in Paris.

Amsterdam from Brussels is possible, although it is a long day so you might be best booking a day tour to make the most of your time. It takes a bit over 2 hours each way to visit the beautiful city known for its canals, museums, and liberal culture.

A Luxembourg day trip from Brussels is a long day but still worth considering. The journey by train takes just over 3 hours each way. In Luxembourg City you can explore the Old Town, visit the Grand Ducal Palace, and take in the views from atop the Adolphe Bridge.

Travel Insurance: Make sure you don’t leave home without travel insurance. Trust us, it’s one of those things you don’t want to skip, especially when travelling with kids. Check out our travel insurance comparison guide.

There are many things to see and do in Brussels, making it the perfect destination for a city break or a stopover when exploring more of Europe. With its mix of historic buildings and modern attractions, as well as plenty of places to eat and drink, you’ll never be bored in this lively city. If you’re visiting with children, there are plenty of family-friendly activities to keep them entertained too.