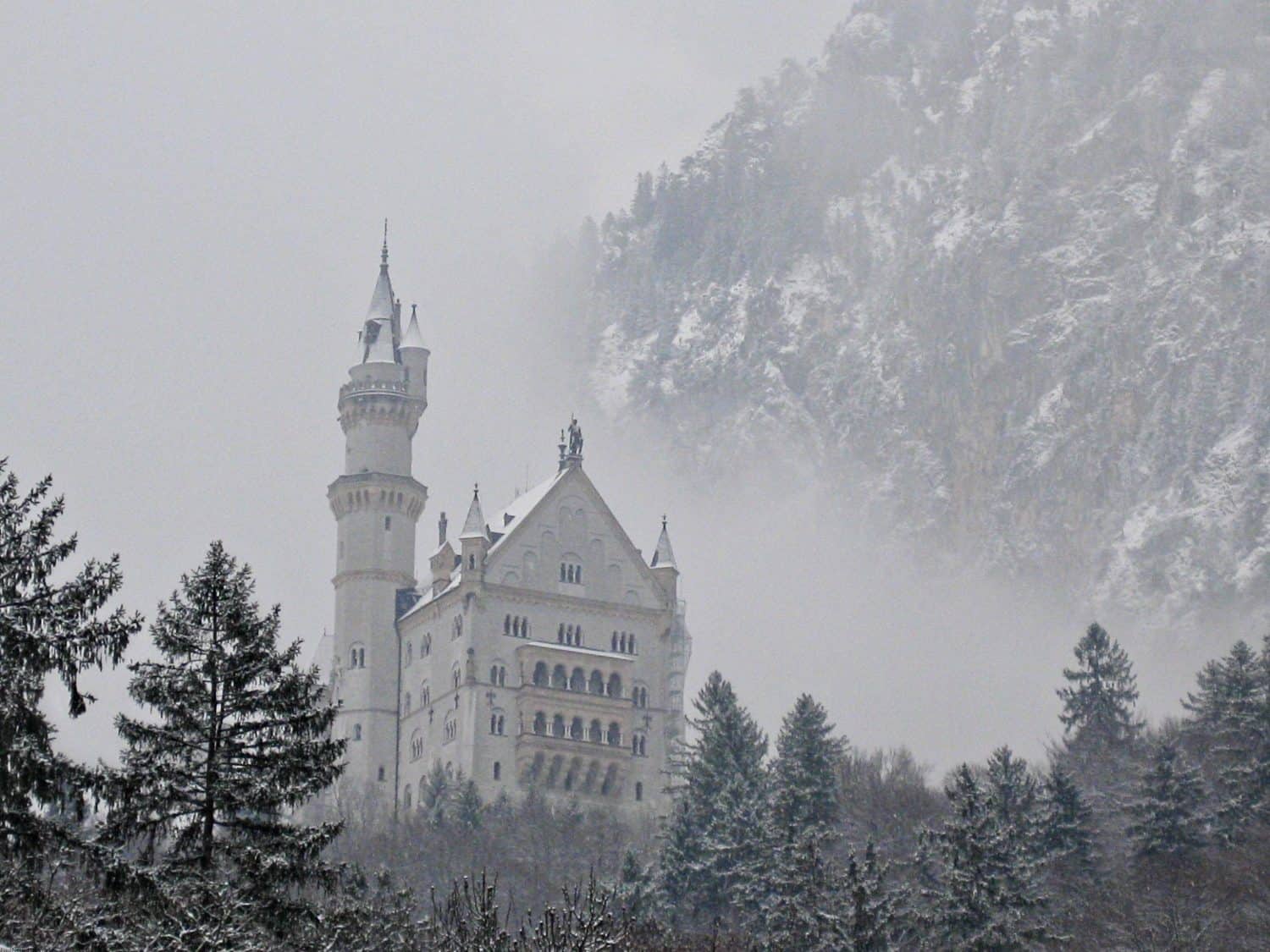 Some destinations make you feel like you are walking into your very own fairytale and no place makes you feel that way more than the Neuschwanstein Castle.

Located in Southwest Bavaria, Germany, sitting above the small village of Hohenschwangau, Neuschwanstein Castle is just one of the many sights and attractions worth visiting in the Bavarian region.

There are actually two royal residences in the area, both having been built on the ruins of 3 existing castles. The older of the two, Hohenschwangau Castle, was the summer residence of King Maximilian II and his family, built on the remains of fortress Schwangau, from 1833.

They both suffered the same fate of falling to ruins but were brought new and impressive life upon the construction of Neuschwanstein Castle from 1869. A somewhat confusing history but that at least gives a brief summary.

If Neuschwanstein Castle seems familiar, that’s probably because it is. Disney used the castle as inspiration for Sleeping Beauty’s castle for the Disneyland theme parks.

This is possibly one of the tourist appeals of the castle, and for that very reason, it makes a great family travel experience.

Every kid will love the chance to feel like they are a fairytale prince or princess.

We visited both Hohenschwangau Castle and Neuschwanstein Castle during a week in the Bavarian region of Germany, in the middle of December.

We took a day trip from Munich, to the nearest major town, Fussën, via train. It takes around 2.5 hours on the train (bahn) to travel from Munich to Fussën. The best option to do this and cheapest is by purchasing a Bavarian ticket, which is what we used for all our day trips from Munich.

Upon arrival at Fussën, we travelled via bus to Hohenschwangau. The Village itself is mostly a tourist stop these days, with a bus stop, souvenir shops and places to eat. It is also the pick up point for tours to each of the castles.

There is also the option of a minibus up to Neuschwanstein however due to trek up the mountain, you still have a 15 minute walk from the bus stop, or alternatively can catch a horse and cart if you want an alternative to take you slightly closer. It’s a steep walk so either option will save your legs a lot.

We took a horse and cart ride. Totally worth it!

We visited Hohenschwangau Castle first, however we did not go into the castle for a guided tour. Instead we chose to admire it from the outside for a while.

The bold gold of the castle is one of my favourite parts, along with the fortress style walls. It gives off a very medieval vibe.

Neuschwanstein Castle was our next stop, jumping in a horse and cart part way along the road when we realised the walk may be a little more than we anticipated. Then around a 300 metre walk up the steep hill where we were dropped off.

The castle itself is set high on a hill with the most stunning natural bushland surrounds. We had quite a wait before our tour began so we had time to enjoy the views from just outside the castle entrance. All the snow capped trees looked magical, all white and fluffy from afar.

The only way you can view inside the castle is via guided tour, which takes less than an hour. Unfortunately no photographs allowed inside though.

Our tour took us through many of the restored and maintained rooms within Neuschwanstein Castle, giving us history of king Ludwig II and his reclusive life. He certainly under-budgeted for what was to be a modest castle.

The castle even has an indoor garden and cave, which were pretty amazing to see. A perfect way for the King to get the best of the outdoors without even leaving his castle, since he much preferred to keep to himself.

After our tour, we decided to take a leisurely walk back down the hill to catch our return bus. Since it was mostly downhill, it was much easier and quicker than the way up. If you are physically up for the return walk, DO IT!

Most other people seemed to prefer catching one of the transport alternatives so we had the road mostly to ourselves on foot, which was pretty awesome. There may have even been the occasional snowball thrown and a whole lot of wow over the winter scenery.

While I have no doubt Neuschwanstein is glorious in summer, the snow covered winter backdrop made it something truly magical. If you can get there in Winter, we would highly recommend it as it adds to the fairytale vibe.

What is unfortunate though is the fact that the location and harsh weather conditions, along with the booming tourist numbers visiting Neuschwanstein Castle each year means a lot of maintenance is needed. It is also anticipated many major restorations will be needed over coming years.

You may want to put Neuschwanstein and Hohenschwangau Castle on your bucketlist of places to see sooner rather than later to ensure you don’t miss it in it’s current grandeur. It would be a sad thought it may one day close to visitors if preservation efforts become too difficult or expensive.

Neuschwanstein Castle is up there among our favourite European castles… at least of the many we have seen so far, but let’s face it, Europe is full of castles. But anything that inspired a Disney castle has to be pretty awesome, right?

Located in Hohenschwangau village, near Fussën, and can be reached by bus from Fussën train station. If travelling from Munich, the cheapest option is the bahn train which takes around 2.5 hours on a Bavarian ticket.

There are admission fees for both Neuschwanstein Castle and Hohenschwangau Castle, with both only accessible via guided tour.

Which castle do you think is more impressive: Neuschwanstein or Hohenschwangau Castle?