A Complete Guide To Visiting the Budapest Gellert Baths With Kids 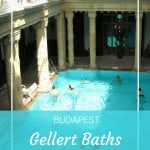 The Budapest Gellert Baths are one of the most famous and popular tourist attractions in Hungary. They are located in the city centre and offer a variety of services such as massages, beauty treatments, and saunas. But can you visit the Gellert Thermal Baths with kids?

We share our experience of taking a child and toddler to Gellert Spa Budapest.

A History Of The Gellert Baths Budapest

Gellert Spa is not the oldest of the bath houses in Budapest but it is one of the most beautiful.

While the Széchenyi Baths are more typically the most popular thermal baths for tourists in Budapest, Gellért Baths is still preferred for many due to its Art Nouveau decor and serene thermal pools.

Located on the Buda side of Budapest and sitting beside the hill of the same name, the thermal pools which the baths source from have been in use since the 13th century.

Then Hungarian King Andrew II built a small hospital by the hot springs as a source of water.

In the 16th century, when the Ottomans invaded Hungary and took hold of Buda Castle, captured a more permanent structure was constructed. This Turkish baths became the foundation for the modern-day Gellért Baths.

In the 19th century, the current structure began to take form, with many renovations and additions added over the years. The baths were renovated in 2008 and now offer a variety of services such as massages, beauty treatments, and saunas.

Our Visit To Budapest Gellert Baths With Kids

When we first started researching our visit to Budapest with kids, one of the common must-do experiences that kept on coming up was the many bathhouses in the city.

Of course, I decided we had to visit one too… but could we visit a Budapest bathhouse with kids? We hadn’t even really thought about that potential roadblock!

I turned to Google in an attempt to get some answers, however, my search left things somewhat inconclusive and we were still not sure if it would be possible. Especially not with young kids.

It was disappointing to think we may miss such the opportunity while in Budapest.

On our first full day in the city, we were approached by one of the many tour bus salespeople who roamed the city, near major attractions.

He was from the Big Bus and presented us with a great package that was perfect for our 3-day stay, giving us public transport all around the city, tours, attraction entry plus tickets to one of the four main bath houses in Budapest.

We asked him what our options were with the kids and he jumped on the phone with his boss for clarification.

He recommended we visit either the Gellert Spa and Bath or the Szechenyi Baths, which were the two most family-friendly of the four bathhouses. So we went with Gellert for our visit. Woohoo!!

On our second full day, we jumped on The Big Bus for some touring around the city and made our way to the Gellert Bath stop. Now, this adventure was not without hiccups…

Simon’s suitcase had been missing since our arrival in Hungary and more than 48 hours later, it still had not been found.

So he was stuck in the same T-shirt and shorts, and no swimsuit! It was lucky for him that at least I had all our toiletries so he could keep his one set of clothes smelling ok! HA

But it meant he expected not to be swimming on the day, even though he knew he could hire a swimsuit. In the end, we convinced him to hire a pair of little red swim trunks so he could join the fun and he’s glad he did. We had a great day!

When you first arrive, you are immediately surrounded by incredible architecture and decor. It all feels very fancy and it did give me some hesitation about taking the kids into such a building! Eeekkkk…

In the main foyer, you can pay for entry, towel, swimsuit and swim cap hire.

Certain entry tickets give you access to private change rooms that have an access band so you can leave your stuff in there while also having somewhere to change.

This was fantastic! And something we highly recommend if visiting with kids so you have an easy place to store all your day gear and privacy for changing nappies or breastfeeding too if visiting with babies and toddlers.

Indoors there are several pools that are heated at different temperatures. Most of them are quite warm, like a hot bath so we headed outdoors instead with the kids to the wave pool!

All of the baths at Gellert are heated to a certain degree, ranging from 21 to 40 degrees celsius. That is very hot water when considering what kids can tolerate.

Outdoors there are 3 pools with the wave pool being one of the coolest and in fact, it was freezing! But being a hot day, it was ok!

The wave pool was one of the most popular in the entire bathhouse, likely because it was a little more family-friendly for visiting Gellert Baths with kids. And our kids had a blast.

With our youngest only a toddler and our eldest 4, and not very water confident, we had to keep a pretty good hold on them when the waves were running but they had a great time jumping around in the simulated waves.

The only downfall is the direct sunlight above, so be sure to put on plenty of sunscreen!!

We went with the coolest bath which was 26 degrees.

Being mindful that many people may be there for relaxation and to benefit from the healing properties of the thermal waters, we did our best to keep them quiet and calm… and they were thankfully really well behaved.

They did enjoy the giant warm bath!

Do We Recommend Taking Kids to The Gellert Baths In Budapest?

A visit to the Gellert Baths with kids is definitely possible and no one seemed bothered that we had our kids there.

In fact, there were quite a few kids of different ages visiting on the day. We are so glad we had the chance to experience this token Budapest attraction!!

We do recommend being mindful of the visitors around yu, especially if they are attempting to relax in some of the quieter areas of the spa.

It is also not recommended to take kids into the hot thermal pools so stick with the outdoor wave pool and the coolest of the pools for your visit.

There is also a cafe area outdoors to enjoy lunch after your swim or a snack, since all that water makes kids very hungry!

How To Visit The Gellert Spa And Baths

Gellert Spa and Baths is located in the southern part of the city centre, on the Buda side – the right bank of the Danube, and very close to the Liberty Bridge (Szabadság híd).

The spring water in the thermal baths is said to have healing properties due to it being rich in magnesium, calcium, sulphate-chloride, hydrogen-carbonate, fluoride ions, and sodium.

The water composition is said to help with the following ailments:

In addition, the inhalatorium helps to treat asthmatic, and chronic bronchitic complaints. Pretty amazing all the potential health benefits of thermal baths really!

The Gellert Baths in Budapest are a great place to take your kids for a day of fun. The baths are located in a beautiful setting, and there are plenty of activities for your children to enjoy. There are also several restaurants and cafes nearby, so you can easily find a place to eat.

Check out more from our Budapest 4 day trip in our snapshot trip video:

Have you visited one of the Budapest baths before? Tell us about it in the comments.