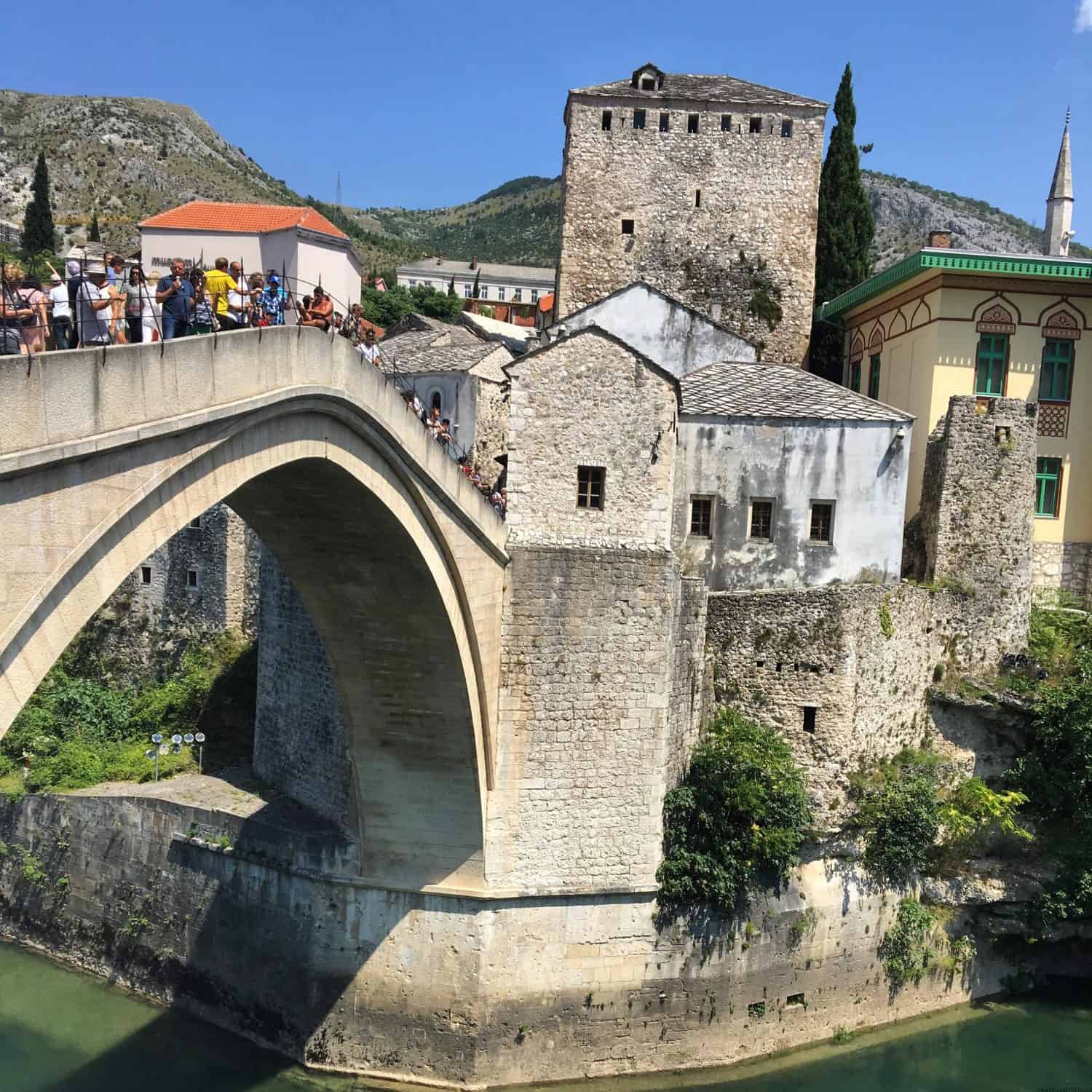 Why You Should Take A Dubrovnik to Mostar Day Trip

If you are staying in beautiful Dubrovnik for a few days, be sure to take a Dubrovnik to Mostar day trip in that time! This is an incredible day trip not to be missed.

During our time spent in Dubrovnik with kids over the European summer, we wanted to make good use of our location with a day trip to one of the neighbouring countries, and after a bit of research, we decided on a visit to the city of Mostar, in Bosnia and Herzegovina. With its unique history and picturesque town, it seemed like the perfect option!

Famous for its UNESCO World Heritage listed bridge – Stari Most, we knew it would be easy to find a day tour to Mostar. But which one to choose?

We researched a few different tours online and booked one that had great reviews and a reasonable price online while in Dubrovnik. Our day trip to Mostar from Dubrovnik was booked through Viator.

There were many alternatives with a huge difference in price. This one had great feedback and high ratings which were important since we were travelling through Dubrovnik with kids. We wanted to be as comfortable as possible knowing it would be such a big day trip from Dubrovnik.

For us, the pickup point was a short walk from where we were staying at our Dubrovnik Airbnb – House Verde. Our bus was a modern, clean, full-sized coach.

When we got on the bus, we were pleasantly surprised to find age-appropriate car seats for our daughters, who were the only children on the tour that day. This was an extra peace of mind when travelling a long distance across borders. It meant we both had one of the kids in their child restraints beside us.

How To Get To Mostar From Dubrovnik

For this reason, you need your passport for this day trip from Dubrovnik. This is the case whether you are making your own way from Dubrovnik to Mostar by private transport or hire car, or if you are visiting as part of a tour group as we were.

The border crossings take some time but the wait was not too bad on the day, especially considering it was peak holiday season in Europe. This, unfortunately, cannot be avoided.

During our tour, we were given an opportunity to stop for snacks and stretch our legs at Nuem on the way through to Mostar.

The next stop on the tour was Medjugorje, the place where, in 1981, six children saw an apparition of the Virgin Mary. It has been one of the most popular spots for Catholic pilgrimage in the world.

Honestly, I was confused about the significance of this stop at the time. And hungry. I’m not a great road traveller at times due to suffering motion sickness if I have an empty stomach.

My priority was food, for my benefit and the kids, as it had been a long drive already. We had a freshly-made toasted sandwich at a small cafe but did not have time to explore at this stop.

My father in law walked across to see the church while the rest of us ate. He said it was nothing overly remarkable, so it wasn’t such a disappointment to miss out. When travelling with kids, sometimes you’ve just got to skip a few things that aren’t so important!

Arriving in Mostar, Bosnia and Herzegovina

When we finally made it into Mostar, it was impressive right upon arrival. What an interesting city to travel through. I had read about the obvious remnants of war and it was certainly so, with buildings in ruins in places and signs of poverty. But also so much history seeping out.

We met our tour guide near a park where our bus dropped us. She was incredible!

She was by far one of the best local guides we’ve had over the years of travelling. Excellent English, mixed with her beautiful Serbian accent. She shared plenty of humour to keep the day interesting and fun, but also the appropriate seriousness when discussing the war and the history of Mostar.

We had a walking tour of the city with great detail and a chance to enjoy the main sights of Mostar, even with our limited time. Seeing Mostar in one day is absolutely possible, but it only skims the surface of what you could see and do.

During our tour, we were given the opportunity to view a short documentary film in one of the stores near the Mostar bridge, showing the footage of the bridge being destroyed during the war, with a very brave cameraman hiding in a nearby cave.

It’s a beautiful bridge and has been restored very well after being destroyed more than once over the years. The Mostar bridge is now most famous for the Mostar bridge jumpers… professional divers who jump off the bridge into the water far below. Eeek!

They do this all year round, even during freezing cold winter when Neretva River would be icy!

They jump for cash, and there weren’t a lot of people willing to pay during our time at the bridge, so we didn’t get to see a jump. This is their full-time income so it is completely based on receiving tips from visiting tourists.

They go through a vigorous training regime before they become professional bridge jumpers and we were given the history on their training during our tour.

Can anyone jump off the Mostar Bridge?

The short answer is yes. But should you? Not without training and permission to do so. The bridge jump is extremely dangerous and people have died or been seriously injured doing so. It is a right of passage for local men as they turn 16, and this is not without training.

Tourists are able to sign up for a bridge jump and go through a brief training on how to jump off Stari Most. This included a practice jump from a smaller bridge first. There are costs associated with this, but when it comes to safety, don’t be stingy!

Would you jump off the Mostar Bridge? It’s a no from me…

What To Do In Mostar

We had some free time in Mostar after our guided tour, although it was nowhere as long as we would have liked. It did give us enough time to enjoy a delicious meal at the popular Turkish restaurant in the middle of the city, Sadrvan.

After lunch, we spent our remaining brief time exploring Stari Most and shop for some local wares.

One of the popular things many of the locals were selling were hand-painted earrings in beautiful colours. There were also lots of beaded jewellery – necklaces, bracelets and earrings. I got a few pairs of earrings to take home for gifts and of course some for myself.

If we had more than one day in Mostar, we definitely would have loved to spend some time at the small beach. Being the middle of summer, it would have been a refreshing opportunity for the kids to cool down. We also would have loved to see the bridge jumpers do their thing and walk a little further from the centre of town.

Although poverty was apparent in places, with a few beggars on the streets… kids mostly, it was still a wonderful experience and a city we would all gladly spend more time in. A couple of hours is not enough, but great when you are limited to a day trip.

On our way back from Mostar, we stopped in the small village of Počitelj, where we had the chance to explore for about 45 minutes and use the facilities.

The kids were tired and so we didn’t get up the top of city walls or see very much of the village, but my brother in law ran up the top to get some video footage… the perks of being young and childless! HA!

Then it was back to Dubrovnik, with the routine border crossings along the way, then the short walk up a thousand (maybe a slight exaggeration) stairs back to our accommodation.

We very much enjoyed our day trip to Mostar from Dubrovnik, even being a sweltering hot day. It was as child-friendly as could be for such a long trip, but not as fun for them being so young at the time at 1 and 3. Having stops on the way there and back was a great way to break up the long drives for them.

Having proper child safety restraints on the bus gave us reassurances with safety during the long drives and were at no extra cost.

Our tour guide in Mostar was an incredible highlight and truly made the day a wonderful experience. Plus of course, the city itself is beautiful. We absolutely recommend this Bosnia day trip from Dubrovnik!

With more time, we would have loved to have had fun at the tiny Mostar beach near the base of the bridge, since it was such a hot day when we visited.

We highly recommend you visit Mostar if you have the chance, especially if you are able to stay for a couple of days to explore more of this beautiful city. Find some great ideas on things to do in Mostar if you are visiting for longer than a few hours.

Booking resources for your Mostar or Dubrovnik trip: