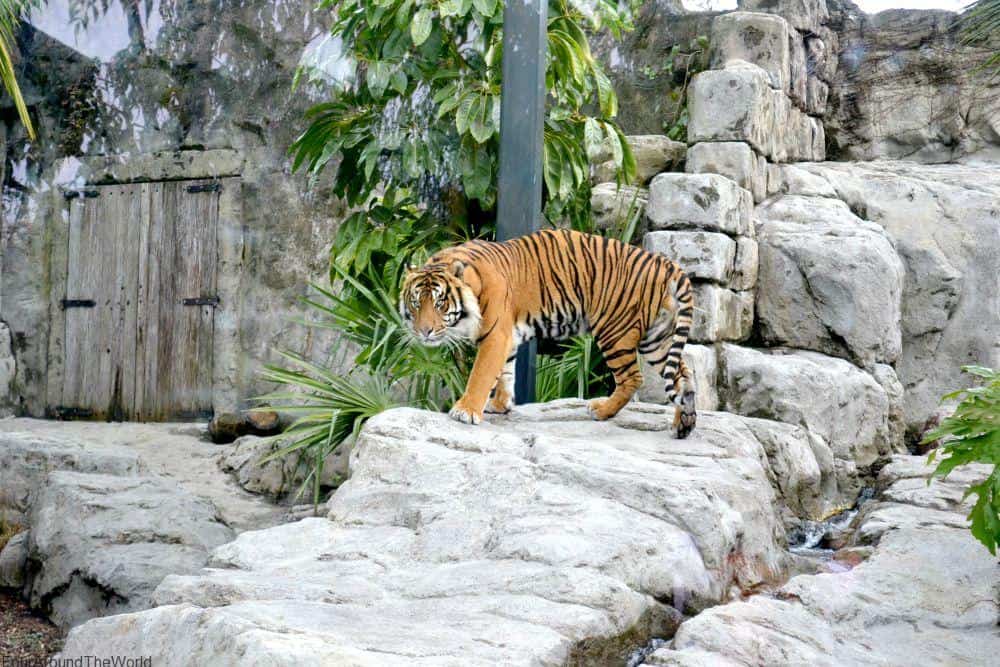 A Quick Visit to Auckland Zoo

We visited Auckland Zoo as part of a one day ‘Great Sights’ tour around Auckland. We only had a long weekend in Auckland, so we had to make the most of our short visit. As we both adore animals and wildlife encounters, we included the optional add on of the zoo visit to our tour, and we are so glad we did.

While we only spent around 2 hours at Auckland Zoo, we managed to see so much and had a wonderful time getting up close with a few of New Zealand’s native treasures.

During our visit to the zoo, we had about an hour and a half of free time to wander around and see the animals, as well as having lunch at the on-site cafe.

We were lucky enough to walk around with a volunteer who gave us some really interesting facts about some of the animals, which made the experience even more enjoyable.

Then we had the opportunity to have an Auckland Zoo animal encounter created especially for our day tour group. Always nice to feel like VIPs!

My favourite animal is the tiger so I love the opportunity to get up close with this majestic animal. Just beautiful!

Some of the enclosures at Auckland Zoo are set up really well so you get a very up close and personal view of the animals.

This is great if you are taking kids because sometimes it can be hard pointing out an animal somewhere far in the distance that the kids can’t even see.

Auckland Zoo has many of the usual zoo favourites, with big cats and small cute furry critters like the one above.

And I think this was potentially the first time I had seen a flamingo in person… at least since I am old enough to remember it. Such graceful and unique birds.

Speaking of birds, there were random chickens and roosters roaming around the zoo, along the paths and everywhere really. A little random but I suppose many animal parks in Australia have scrub turkeys roaming everywhere, making a mess.

This particular rooster was so bold in his behaviour, with no concern of the many zoo visitors walking by so we couldn’t help taking his photo.

Most of the enclosures were quite spacious and designed well to mimic some of the natural environments the animals would have in the wild. While there is only so much room for the animals in a zoo, it’s nice to see them make an effort to keep the animals happy and healthy.

Auckland Zoo has a focus on conservation, from funding conservation projects to actual breeding programs within the zoo and educating visitors on the importance of their efforts.

To me, if a zoo is lacking a focus on conservation efforts, chances are they are not treating their animals too well and would make me think twice about visiting.

While tigers will always be a stand out for me at any zoo, the giraffe enclosure at Auckland Zoo is quite impressive. They can be rather shy animals and tend to roam far from the perimeters so you never get a great view.

At Auckland Zoo, they have a pathway that goes up around one side of the enclosure, allowing you to look down and get some great views of these interesting animals.

As our visit to Auckland Zoo was part of a day tour and we only had limited time at the zoo, we were given an up-close animal encounter with some of New Zealand’s most well known native animals.

This, of course, included a kiwi however these shy animals are not fans of bright lights so the room was quite dark.

This isn’t a great photo for that very reason, but you get a bit of an idea of how the kiwi looks. They are super cute little creatures. Our daughter has a small toy kiwi her uncle got her during his own New Zealand trip and it makes a noise which I assume is the noise they make… sounds a little like a squeaky sheep.

Auckland Zoo is well worth a visit if you love a chance to see animals on your travels. Always a hit if travelling with kids. We have been to quite a few zoos and this one was definitely up with the favourites so far.

Auckland Zoo has a large variety of species from around the world, including several of New Zealand’s own native animals. The zoo is open all year round with the exception of Christmas Day.

Location: Auckland Zoo is west of downtown Auckland and accessible by car and public transport.

Heading to NZ soon? Check out our ultimate guide to what to pack for New Zealand for adults & kids.

What is your favourite animal attraction around the world? Leave a comment below. We would love to hear it!