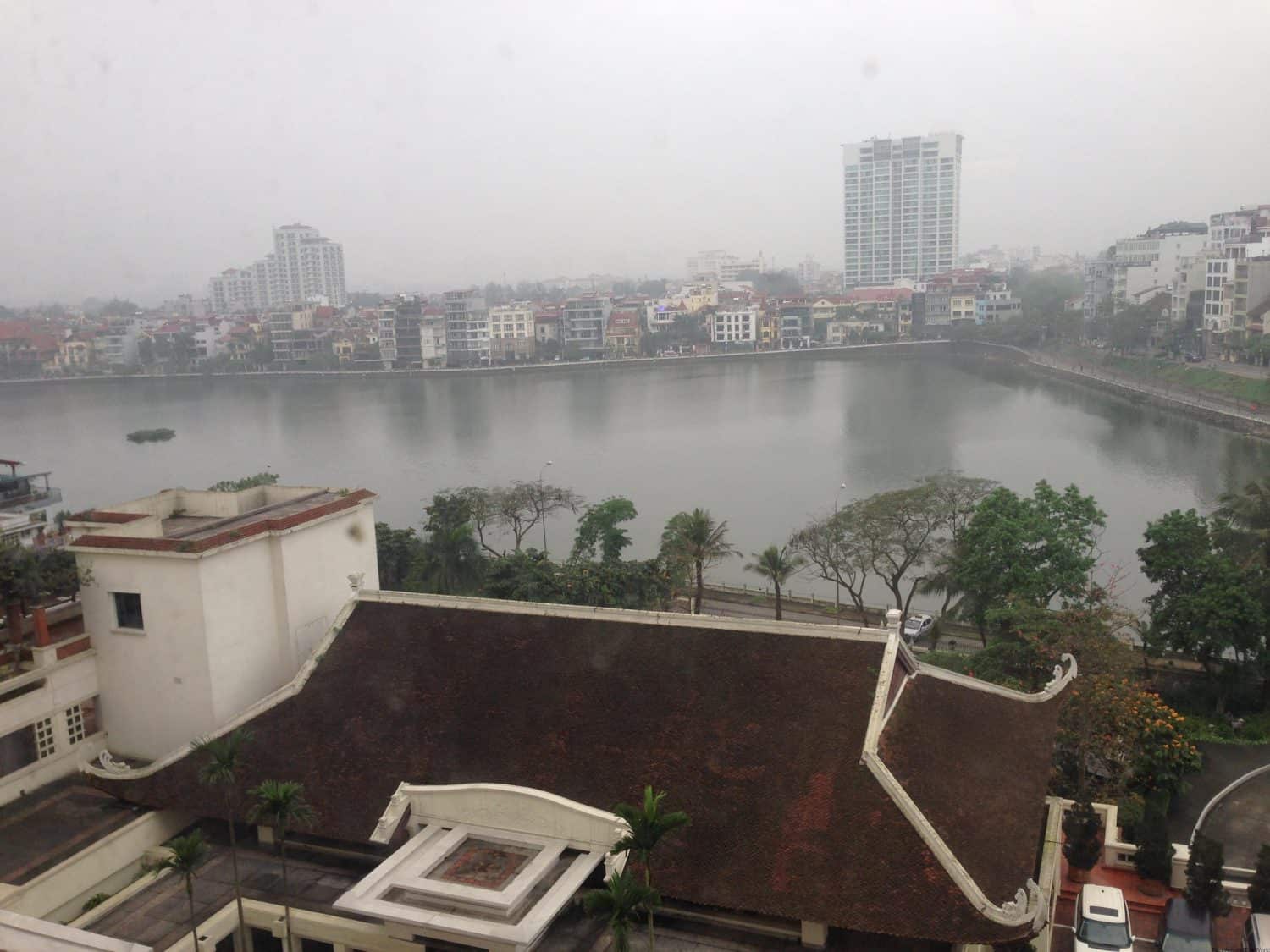 Last year one of the must do Vietnam experiences we wanted to have was cruising Halong Bay. Even though were were travelling with a 14-month-old toddler, we were determined not to miss this natural wonder during our Vietnam holiday.

For this reason, we spent 2 nights in Hanoi – one night on either side of our two night cruise. Our first night was spent at Hanoi Sheraton Hotel and was included in our cruise package with Au Co Cruises.

Hanoi was not high on our must-see list, since we were already spending our time in Ho Chi Minh City and Hoi An, but Halong Bay is a fair way from the major cities and about a 3 or so hour bus ride from Hanoi.

No doubt you can imagine a 3 hour minibus ride with a toddler. Not our favourite part of the trip, but she did great considering. Lots of snacks, toys and naps got us through. But thankfully we were well rested after our night at Sheraton Hanoi Hotel.

The Sheraton Hanoi Hotel is situated a little further out of the city and as such, we did not see much of Hanoi during our stay, which is unfortunate as there are some great family attractions in Vietnam not to be missed.

It is a fairly quiet area, alongside a river. We were unaware exactly how far out of the city centre it was when we received our booking information, although being part of an accommodation package, this was fine.

We knew we would not have a lot of time to explore following our flights from DaNang and our early start the next day.

Upon arrival via private transfers, the staff at Sheraton Hanoi Hotel were very welcoming and thorough.

They offered us an upgraded room at a very reasonable price and had we been staying more than one night, we would have likely taken them up on the offer. however we were just looking for somewhere comfortable to sleep for the night.

We were taken up to our room and given a very thorough explanation on the amenities and services, then left to settle in. We were starving though so we dumped our bags and headed to the onsite Oven D’or casual dining restaurant for a quick bite to eat.

Lily enjoyed running around the dining areas so luckily it was pretty empty by this time. Then back up to our room for a relaxing time.

As anyone travelling with a toddler knows, we needed some down time after the boring airport wait and flight. DaNang Airport does not have a lot of exciting stuff going on, being a rather small airport in Vietnam.

We spent some time just chilling in our room, hoping to get little miss to nap, but she was more excited by the arm chair in the corner of the room.

The view from our room window

Giving up on nap time, we decided to explore the hotel and surrounds. The hotel itself is set on some garden areas right along side a river so it is quite scenic and peaceful, compared to the hustle and bustle of central Hanoi.

We loved the temple style look of the hotel, with a couple of temple style roof areas and pergolas in the front of the hotel. Plus Lily loved the grassy areas to run free for a few minutes after being stuck on an plane for part of the day.

The Hanoi Sheraton Hotel had some great facilities, like the cool swim up bar area in the pool, but none of it was being used.

We aren’t sure if perhaps we were there during an off season, but the pool was full of leaves and needed a clean and very few of the pool lounges were set up. There was no one around either. So strange being at a hotel with so little activity outside of the main foyer area.

There was also a gym which was also empty. Very bizarre, as to imagine both areas could be very popular and it was still reasonably warm.

There was a bizarre sight in the river alongside the hotel. A man was sitting on what looked like a floating tire, fishing. Not quite sure how he got there or back to the bank, but it got our attention for a few minutes.

We wandered beyond the hotel, in search of some local gem for dinner but there wasn’t much nearby so we ended up settling on the restaurant on the hotel site, separate to the main dining area… a French restaurant.

It does not appear on their website so we don’t think it is owned by the Sheraton Hanoi Hotel, but the food was great and so was the service. They even asked if they could give Lily a couple of fancy macaroons as a treat after dinner. She didn’t like them… but we did!

Then back to the room for a big sleep before our cruise the next morning!

We had inclusive breakfast in our package in the main dining area, with a massive spread of western and Vietnamese dishes. The breakfasts at all the resorts we stayed at were crazy good! This was no exception.

Then packed and down to the lobby ready for our Halong Bay cruise transfer. But it was late. Quite late.

Thankfully the amazing staff at Sheraton Hanoi Hotel were onto it and took the details for our booking and phoned the company on our behalf, reporting back with updates. Thankfully it arrived about 45 minutes later… but a bit stressful! Then we were on our way to our next adventure and leaving Hanoi for a couple of days.

Our stay at Sheraton Hanoi Hotel was exactly what we needed – a comfortable and quiet hotel for a night away from the hustle and bustle of the busy inner city area. We enjoyed some fresh air, nice food and a good night sleep and the service was great.

As Lily was only 14 months old, we had the bad habit of co-sleeping so she didn’t need a cot, but there was a chance to get one. Instead we had a big comfortable bed and all was fine.

Otherwise, the hotel itself did not appear to have a lot of facilities aimed at kids as such, but like everything in Vietnam, the staff were always friendly, even when our little ratbag was running around the restaurant a little bit during lunch. No looks of disapproval at all.

One perk was the bathtub in the room as everywhere else we had stayed only had showers, which was fine, but sometimes kids want to have a splash in the bath! In fact the bathroom was huge.

We must have been there at an off season time (it’s so warm in Vietnam most of the year, it’s hard to tell the winter from the summer) as we were there in April and it was really really empty.

It would have been nice to have had the opportunity to use the pool in the warmer weather, but it wasn’t too hot during our Hanoi stay.

Overall, Sheraton Hanoi Hotel was a nice place to stay with everything we needed for our trip.

Sheraton Hanoi Hotel has 299 rooms with varying level of luxury, including all the usual amenities with private bathroom, tv, gym, outdoor pool and the option to purchase WIFI access.

There are several options for dining on site, as well as a bar and lounge area.

Do you have any accommodation recommendations in Hanoi?