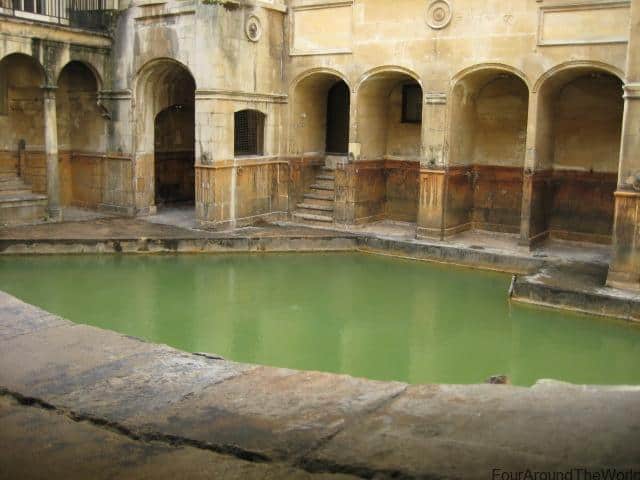 The Roman Baths of Bath

A couple of years back, on our visit to England, we took a day trip from London to Stonehenge, Windsor Castle and the Roman Baths. Each of the 3 stops on our day trip was great for different reasons, however, the Roman Baths may have been the favourite on the day.

The Roman Baths in England are situated in the city of Bath, claimed to be one of the best-preserved Roman remains in the world and an essential part of your weekend in Bath itinerary.

Having been to Rome and seen some of the amazing ruins there, some in much worse shape, we would have to agree that time has fared the Roman Baths well.

From the emerald coloured waters and the stone pillars, the Roman Baths are a beautiful piece of ancient history to explore, with a chance to step back in time and imagine how people of the past lived.

I love history. One of my favourite university subjects was Roman History, as part of the Arts degree I initially commenced, on my way to obtaining my psychology qualifications. It had no relevance what-so-ever to psychology, but it was a subject I was so excited to study.

We travelled to Bath on our tour bus, through the windy and hilly streets that lead us to our destination. This drive alone was worth it. Bath is a beautiful city and one we plan to go back to and explore for a couple of days next time.

We arrived at the Roman Baths entrance and were lead inside by our guide. Being an English tour in an English speaking country, our tour wasn’t one that required a lot of guided group stuff. There was a brief introduction and informational session at the start, but then we instead had the chance to visit and explore as we pleased, so long as we arrived back at the bus before departure. This was more our style, giving us the chance to enjoy the day without feeling we had to stick with a group all day.

With the Roman Baths being under street level for the most part, the visit starts off on the terrace, where there are great views of the baths from above, along with some views of the surrounding area. As you can see, there are quite a few ‘Roman Emperors’ standing guard around the terrace area.

Once you make your way down from the terrace, it is impressive to see exactly how much further the baths extend. There is much more than what is visible from above, with tunnels and inlets throughout.

Several parts of the Roman Baths have been converted into museum areas, telling the history of the baths, the people who worked there and the people who visited.

There are also several models of how the baths would have looked in the past. This was an interesting insight into ancient times.

The entrance of Temple Pediment is visible, with the stone carving of what is believed to be Gorgon’s Head on display. While the temple has been largely reconstructed, visitors instead can view an animation on how it is believed the temple looked during the ancient days.

There are many other ancient artifacts on display throughout the museum also.

That stunning green water in the centre of the Roman Baths is known as the Great Bath, filled with water from the Sacred Spring. The naturally hot water sits around 46 degrees celsius and continues to rise daily, as it has done since ancient times.

The Roman Baths website indicates there is in fact around 1,170 000 litres of water that rises within the Sacred Spring every day. Whoa! And back in ancient times, it was believed to be caused by the Gods, so many ancient artefacts were thrown into the water as offerings to the Gods. Many of them are also on display, including more than 12,000 Roman coins.

It was actually very impressive to see the elaborate overflow system created by the ancient Romans. They made very good plumbers back in those early days. I am always astounded by these things because they were without the modern advancements we have today, yet managed to make amazing things happen.

Not only that, but they also had saunas and freezing plunge pools created as well, just showing what innovation existed even in those early days.

The Great Bath itself is 1.6 metres deep, which was ideal for bathing, with steps leading down into the water from each side of the bath area. Essentially a great big heated pool… minus the heating costs!

We were told the green was caused by the minerals in the naturally forming water and not to drink the water from the Great Bath… not that we had planned to. Yuck! But mostly because it is untreated, so if visiting with kids, make sure they aren’t tempted to dip their fingers in for a taste…

Best Places To Go For Halloween With Kids Around The World

There is a treated drinking fountain containing the same natural spring water, minus the potential nasties though with the chance to have a cup of water just before your exit. Of course we had some, just to say we did!

While you cannot swim in the Great Bath for the very same reason you can’t drink it, there is a treated alternative nearby at the neighbouring Thermae Bath Spa if you are really keen.

The Roman Baths is situated in Bath, a significant distance from London. The Roman Baths website indicates it is approximately 1.5 hours by train or 4 hours by bus (I can’t recall our bus journey taking that long but it’s possible).

We visited the Roman Baths as part of a bus tour that also visited Stonehenge and Windsor Castle.

Entry between 9am and 5pm, with exit by 6pm.

Prams are not able to be used while visiting the Roman Baths as the surfaces are not suitable. You may wish to consider alternatives, such as a baby carrier if visiting with very small children and babies.

Check out the best things to do in London with kids and coolest family attractions in the UK.

Do you have a favourite ancient site in the world you have visited? Let us know what it is.