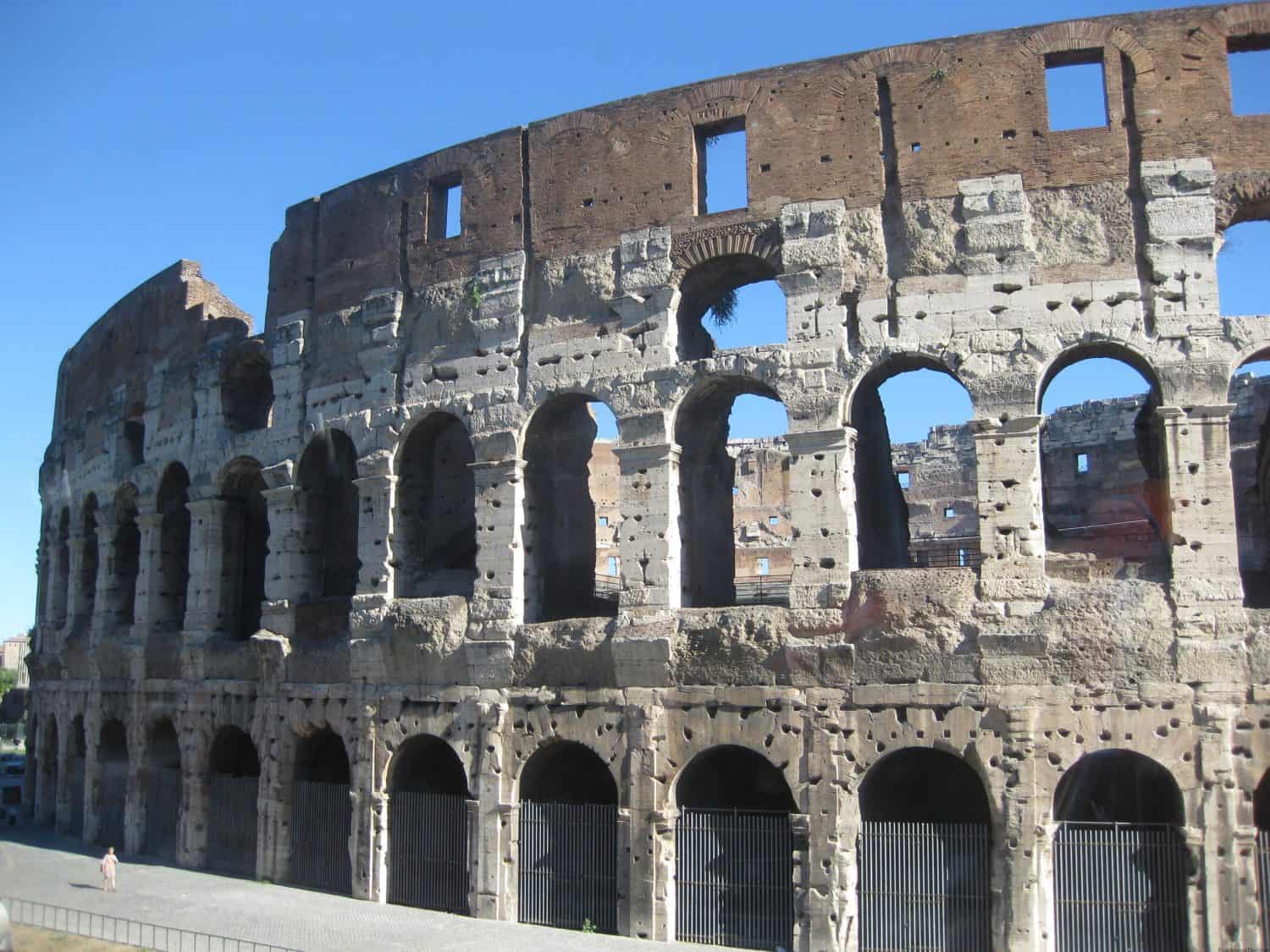 Stepping Back in Time: Must See Ancient Rome

Rome is one of those destinations that has it all. From modern luxuries to history that goes well beyond what most of us can even fathom. A visit to Rome would not be complete without stepping back in time and visiting some of the Ancient Roman sites. While some of them are simply ruins and run down remains of what was Rome so many centuries ago, other parts have been so well preserved, you can almost imagine yourself back in Ancient Rome.

One thing that I love about visiting Rome is the fact that everywhere you go is a pretty much a history lesson brought to life. A subject I adored studying back at university, while dabbling in some non-psych major subjects. Learning about civilisations from the past is a passion and seeing it all come to life was an experience I will always cherish.

So what are the must see Ancient Rome sites you must visit, when in Rome? Check out our recommendations.

Our visit to Rome was a 3 day visit during a guided tour, which made it easy to know the best places to visit in a short time and the chance to skip the queue at most places. This helped with the summer crowds during our visit, however you can easily make your way around Rome without a tour.

For more of our Italy travel tips and inspiration.

When talking Ancient Rome, usually the first place that comes to mind for most is the Colosseum. It has featured in many a Hollywood film, depicting the violent and action packed battles that took place, all in the name of entertainment back in the Ancient Roman days. But being there you learn exactly what an architectural masterpiece the Colosseum really was.

Everything from the toilet and plumbing systems in place even back in those early days, to knowing the Colosseum was transformed into an aqua battle zone on occasion. It is beyond me how such things were achieved, but a history lesson we thoroughly enjoyed during our tour of the Colosseum during visit to Rome.

During the summer months, Rome is chaotic with tourists flocking from around the world and this means places such as the Colosseum are very crowded. For this very reason, a guided tour can be beneficial and some tours actually take you to areas you can not access if you were to do a self-guided visit. Something to consider definitely.

First developed in the 7th century BC, before growing over time to become the social, political and commercial hub of the Roman empire, the Roman Forum is a set of ruins of temples and other important structures. Some of the most prominent sights include the Arco di Settimio Severo, the Curia, and the Casa delle Vestali.

While there are many attractions in Rome that can easily be enjoyed without a guide, we do recommend doing a guided tour of the Roman Forum because you may otherwise have very little understanding of the importance of what you are actually seeing otherwise. We had an excellent English speaking guide who was very thorough and informative in her explanations, and it really helped bring the ruins within the Roman Forum to life.

There is an entry fee to visit the Roman Forum, and it remains open only during daylight hours for safety reasons.

Included in the admission of your Roman Forum entry ticket price is access to Palatine Hill, as they are located in the same archeological zone. Palatine Hill is the centre of the 7 hills of Rome and is one of the most ancient sites in the city. The site gives prominent views of the Roman Forum and is worth it simply for the great photo opportunities.

Palatine Hill was a popular spot for early settlement huts, before becoming an area where the wealthy resided and palaces were built. It is a very large area, with more than one entry point when visiting. The easiest access point is near the Colosseum. It is yet another part of Ancient Rome where a tour guide or audio guide is beneficial to explain the history behind the area.

The Roman Pantheon stands well preserved and prominent in Rome, a temple dedicated to the gods of Pagan Rome. The Pantheon, while it’s exactly history and purpose were unknown in great detail, has been in use ever since it was built and stands as a fascinating architectural attraction. It has also become the tomb for many prominent Roman figures over time.

Apparently we both forgot to take photos of the Pantheon during our visit. Bizarre since we are both usually crazy snap happy but it was a really long, hot day so chances are we were too worn out and just wanted to enjoy the visit.

The Pantheon is open daily between 9am and 6:30pm Monday to Saturday and 9am until 1pm Sundays.

Castel Sant’Angelo is a striking structure, with a long history of its own. Positioned along the Tiber River, Castel Sant’Angelo was first constructed as a mausoleum for Emperor Hadrian, starting back in 123 AD, connected to the city by a bridge, Pont Sant’Angelo, now adorned with many statues along the way. The structure was later used as a Papal refuge in case of danger, connecting via secret passage to the Vatican and fortified.

The name Castel Sant’Angelo comes from the angel statue on top of the fortress, depicting archangel Michael. The statue was said to appear during a plague in the year 590, and suddenly the plague was over.

There is an admission charge to enter Castel Sant’Angelo, now a museum, preserving the history of the fortresses past.

While some may argue it is just a fountain, the Trevi Fountain is one that is famous and well recognised throughout the world. It is worth a visit (even in the crazy busy peak holiday season) just to marvel at the finely sculpted fountain and the intricate detail that went into creating such a masterpiece. But of course like most things in Ancient Rome, the Trevi Fountain was also functional, responsible for providing a water source to the city of Rome.

These days it is popular for tourists to come and throw coins in the fountain. Coins are to be thrown using your right hand, over your left shoulder. By doing so, it is said you will return to Rome. But if you are seeking love, throw a second coin and a third if you wish to hear wedding bells.

An interesting fact though, each night the coins of the day are collected and used to fund a local charity, providing charge cards to purchase groceries for the needy. With a daily average of around 3000 euros thrown into the fountain each day, this is a substantial amount of donations towards the charity… and yes, it is a crime to steal from the Trevi!

During our visit it was the middle of summer and very busy. There were also locals trying to sell you everything and scammers trying to luck as well, such as offering to take your photo and charging you a small fortune for their effort. Something to be careful of!

While this is not exactly Ancient Rome, since Vatican City is technically a country in its own right, it is still a must-visit in Italy and part of Ancient Rome. The Vatican is home to the Pope and houses the Vatican museums, where you will see the tombs and the somewhat creepy but well preserved embalmed former Pope.

Be sure to visit the Sistine Chapel, which was surprisingly tiny compared to what I expected but the famous artwork is a must see. Also St Peter’s Basilica is simply beautiful. While you can certainly do a self-walk through the Vatican, we chose to do a guided tour and see much more than we would have on our own and learn more about the history of the world’s smallest independent state.

At the time of our visit, there was a wedding taking place in one of the smaller chapels in St Peter’s Basilica. We were only 2 months from our own wedding during that visit and I remember thinking how amazing it would be to be married in such a monumental place… but apparently very tacky, or so our guide said! haha lucky we stuck with our garden wedding back here in Brisbane instead!

The Vatican gardens are absolutely beautiful and worth a wander as well. Although I believe access is only through guided tours. Worth it!

Apart from those must see Ancient Rome sites, there are archaeological sites scattered all through Rome where new discoveries are being made. This is pretty amazing to witness. These are mostly sectioned off from public access but you can usually see what is going on and if you are lucky enough, you may see them uncovering some pretty special stuff… very slowly and carefully! You may be waiting a while!

There is so much you won’t want to miss, and a few days would be ideal for your visit. However this is not always possible! If you only have one day in Rome, check out this itinerary to make the most of your visit.

TIPS FOR VISITING ROME WITH KIDS

And if you are thinking of visiting Rome with children, we could not recommend it more. While visiting in the off season may be more enjoyable, away from the crowds and the at times sweltering heat, there is no education like the in person, ‘hands on’, up close and personal Ancient Rome experience. Reading about these places during school lessons is one thing, but actually standing there where it all took place, that’s the ultimate way to teach children (and adults) about history!

For me, I have only had the pleasure of visiting Rome on one occasion, however Simon was lucky enough to be there back when he was a kid too, and he remembers many of the main ancient sights so well. And I love looking at his goofy kid photos during his early European travels.

FOR MORE TIPS ON TRAVELLING WITH KIDS, CHECK OUT OUR MEGA GUIDE ON PLANNING OVERSEAS TRAVEL WITH CHILDREN