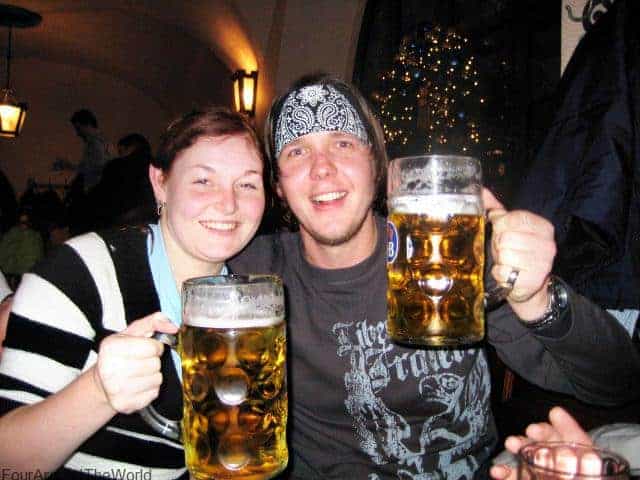 Sometimes when you look back at a photo from a past trip or event, you can’t help but laugh. Some photos hold memories so strong that the image doesn’t even tell a fraction of the story that actually went on.

This week’s Snapshot Story photo is one of those for sure. It was from our European Christmas in 2008, during our first week in Europe. My first overseas trip in fact. Even without the title, most people would do a pretty good job guessing where we might be, holding those familiar famous beer steins.

Our second week and a half in Europe that year was spent in Germany, mostly enjoying the wonderful cities on offer in Bavaria. Our main ‘home base’ was Munich, where of course we had a trip to the Hofbrau Haus one night.

While we were all smiles and beer poses for the photo, the first point of amusement is that I hate beer. Not even in Germany would I dare drink beer. Nope… not my beer. I can’t even remember who’s beer it was now… probably my brother in laws and I probably should have drunk it for him to save him some embarrassment.

You see, the Connors’ men like their beer. Some of them are better at it than the rest though. Simon is one of them. It drives me crazy, but his Polish genes hold him in good standing after 4 litres of beer. He tells everyone it was 5. But the person drinking the Coke that night can count better… trust me!

His younger brother ended up sick in the bathroom that night, after maybe 2.5 steins. This was also after a loud rendition of some Aussie pub song, over and over. His dad wasn’t much better. Not sick but embarrassing in other drunken ways.

My mother in law was ready to murder the 3 of them on the walk home. Hilarious. And thank goodness for my younger brother in law, at all of 14, he provided great comic relief along the way.

It just goes to show that travel with family, whether it’s with your kids or your parents (or husband’s parents) all has it’s challenges and benefits. We’ve made wonderful memories travelling with the extended family… not to say they don’t drive us crazy sometimes too. But that’s what family are for!