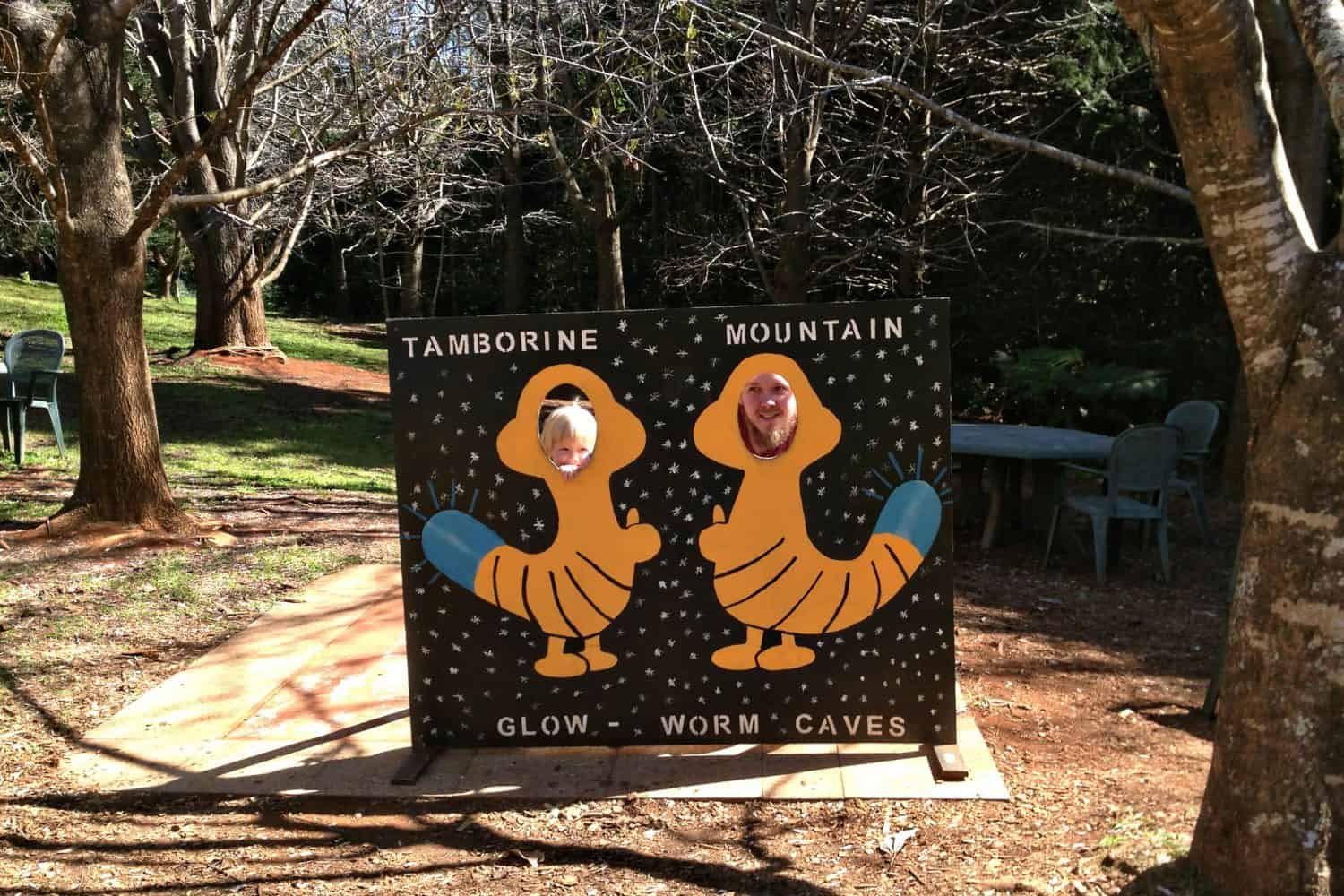 When it has been a while between travel, sometimes you need to make your own adventures closer to home to manage a bit of that wanderlust, so we decided to take a day trip a little over an hour from home, to Mt Tamborine. While we were there, we visited the Glow Worm Caves, since it was a relatively cheap attraction and something unique we have never done before.

We didn’t really have much background knowledge on the Glow Worm Caves before we went, but saw it as something interesting and unique to do, with a relatively low admission price. It was one of those random Google moments and deciding to check out one of the activities that popped up high in the search results.

The Mt Tamborine Glow Worm Caves are a man-made cave built for the purpose of creating a habitat for the glow worms, located on Cedar Creek Estate. A visit through the glow worm caves is only possible as part of a guided tour since it is pitch black dark aside from the little glows.

We arrived at Cedar Creek Estate and headed to the sales office to book our Glow Worm Caves tour. We were told we needed to leave our pram there as it would not be possible to take it inside the cave. In hindsight this was a pretty likely thing we should have considered and we regretted not putting our 9 week old daughter in her Ergo carrier instead.

A tour was starting in 4 minutes so we simply left the pram and decided to carry her rather than heading back to the car for the baby carrier.

We headed down to the waiting area and were actually surprised by the number of people waiting since tours were every half hour. There was at least 15 people waiting for the tour.

Our tour guide arrived shortly after and lead us along the wooden walkway, through a lovely rainforest. She explained it was a relatively young rainforest so not a thick coverage as yet, but still popular with wildlife. In fact she said there was a red belly black snake that lived somewhere down under the walkway, last spotted 2 days earlier.

Thankfully all is safe up on the bridge walkway. But you may get lucky to spot other wildlife, such as native Australian birds and lizards.

We were lead into the man-made cave entrance to a first cave area that was lit with low lighting and set up with chairs in front of a tv screen. A DVD was put on for our group giving us educational information on the glow worms and the caves. The DVD goes for a little more than 5 minutes and in that time, your eyes are able to adjust to a darker room.

We were worried our 2 year old would get bored at this stage as she often has during similar experience in the past. But nope, she was providing her own commentary on the video loud enough for most of the tour group to have a couple of giggles during the DVD. Plenty of ‘Wow’ and ‘Look mum’, between her observations. Meanwhile, I took the time to quickly feed her baby sister so that we could hopefully have two happy kids during the tour.

Everyone was given a necklace with a glow band attached and told to wear the it so the glow band was on our back. This would allow us to see the person in front of us when walking through the pitch black cave. We were then lead into the main glow worm cave.

Our tour guide had a special red torch which allowed us to see the glow worms and their ‘webs’ up close. She showed us several different glow worms and nest types, providing detailed information on the worms and their lifestyle, habits and very short lifespan. It was surprisingly interesting… considering we aren’t exactly insect fanatics.

One thing we were worried about was having a toddler scared of the dark and a bored, grumpy baby. Neither happened. Even water dripping off the cave roof and onto our baby’s head didn’t bother her and our toddler, well she got a few more giggles during the tour with her 2 year old observations. And not even slightly phased by the pitch black dark cave, since her dad was carrying her the whole way.

The whole tour only takes half an hour so it is only a brief attraction, but you do learn quite a bit, such as the fact that these glow worms are only found in Australia and New Zealand and they eat flies.

Most amusing was that the guides are required to catch flies using large butterfly nets each day to feed the glow worms, who then trap them in their web fibres. Yes, she said they have to run around with the nets looking crazy several times a day.

There is plenty to do at Cedar Creek Estate after the Glow Worm Caves tour. There is a winery on site and they offer wine tastings, with a large variety of different wines on offer. We decided not to do the tasting as we were keen to head off for lunch elsewhere.

However, there is also an onsite restaurant that offers a range of meals and great views of the estate, including a large pond and the rainforest views. There is a function room also, which is popular for weddings and functions.

And of course, you need to stop for a quick photo in the Glow Worm sign before you go.

We enjoyed our tour of the Glow Worm Caves as something new and different to do. It is a good activity to do as part of a day trip, as it certainly would not fill much time in your day on its own.