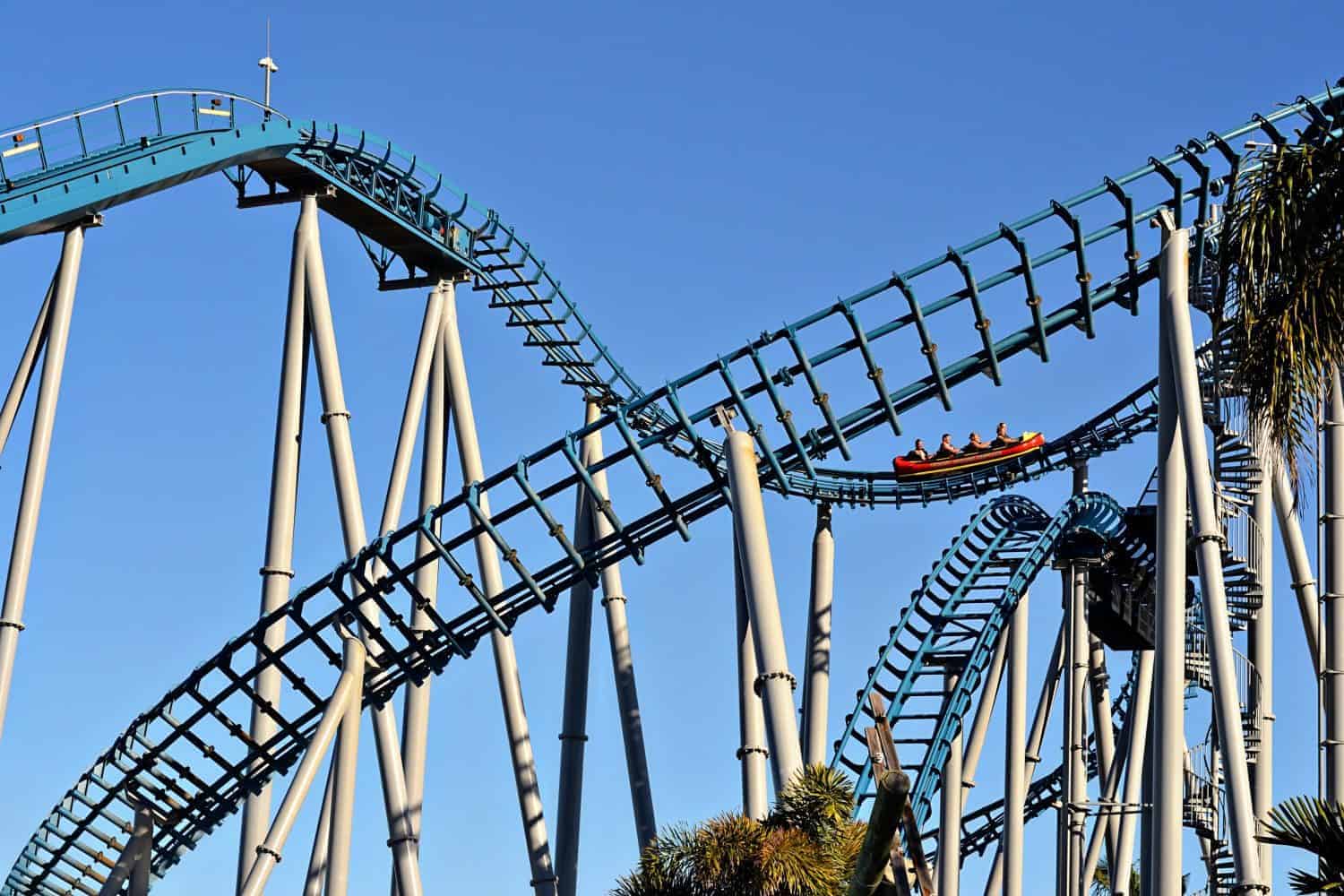 Theme parks are fun no matter your age. All the best theme parks offer something for every member of the family, which makes them the perfect day trip to add some fun to your next family travel adventure.

No matter how old I get, I still love a day at an amusement park and we as a family have big plans to visit the best theme parks around the world eventually. So far our efforts are a little bleak though, having only managed to visit Australia’s best theme parks and no where beyond.

So to inspire our own family travel to see the world’s best theme parks, and to help you find your own new favourites too, I have put together an ultimate theme park list to add to your travel bucketlist.

1. Movieworld, Gold Coast – If you love the magic of the movies and themed rides around your favourite blockbusters, Movieworld is Australia’s closest equivalent to Universal Studios. Many movies have been filmed within the Movieworld studios, although the theme park has moved away from it’s behind the scenes movie focus and more on building its thrill rides and shows. There are some great little kid friendly rides and attractions. The Scooby Doo Spooky Coaster is by far a favourite of ours, although aimed at big kids and adults.

2. Dreamworld, Gold Coast – Dreamworld is the home of Australia’s best thrill rides, from the Giant Drop to the Claw and everything in between. There is plenty on offer for the younger kids too, with Wiggles World and ABC Kids World, featuring plenty of their favourite characters. Dreamworld also appeals to animal lovers with Tiger Island and other animal encounters, such as native Australian animals you can get up close with. Dreamworld is Australia’s largest theme park.

3. White Water World, Gold Coast – The newest of the Gold Coast theme parks, White Water World is a water park extension of Dreamworld, offering thrilling water slides, relaxing pools and plenty of water fun. You can visit the park separately or combine your entry with a visit to Dreamworld.

4. Seaworld, Gold Coast – Marine life is the focus of all the Seaworld parks around the world, with plenty of up-close animal encounters and shows, some rides and a Nickelodeon Land for the kids with all your favourite characters like Dora and Spongebob Squarepants. Read our ultimate Seaworld with toddlers and kids guide.

Check out our Seaworld Gold Coast and Seaworld Resort video from our recent visit:

5. Wet ‘N’ Wild, Sydney – Due to the popularity of the Gold Coast water park, Sydney opened their own Wet’N’Wild water park in 2013, offering all the same awesome water slide perks and a variety of different water attractions.

6. Aussie World, Sunshine Coast – Featuring over 30 rides and attractions to suit young kids and adults, from water rides and thrill rides, giant slides and putt putt. This is the one Queensland theme park we have yet to visit, so it may be top of the list of Australian theme parks to visit next.

7. Luna Park, Melbourne – Based on the success of the iconic Luna Park on Coney Island in 1903, Melbourne opened their own Luna Park in 1912, which continues to operate with a range of rides and attractions.

8.Wet ‘N’ Wild, Gold Coast –If water parks are your thing, Wet and Wild has been Australia’s leading water park for as long as I can remember. With heaps of different water slides and rides, with new water attractions added often, this is the best water park destination for the hot Queensland weather.

9. Luna Park, Sydney – Following on from Melbourne’s Luna Park and after the closure of Luna Park Adelaide , Sydney opened their own Luna Park in 1935, which continues to operate. It is also the hub of various entertainment events through the year.

10. Adventure World, Perth – Home to over 30 rides and attractions, including water slides and animal encounters with Australian wildlife.

2. DisneySea, Japan – All parts of the park accessible by steamer boats.

3. Universal Studios, Japan – Features Universal Wonderland which is an amusement park zone within the park.

4. Nagashima Spa Land, Japan – Home of the massive Steel Dragon rollercoaster and plenty of other rides.

6. Legoland Water Park, Malaysia – Over 20 water slides, and more than 70 lego models. Worlds largest water park. This one is high on our list.

13. Universal Studios, Singapore – Experience the magic of the movies.

15. Ocean World, Korea – Most popular summer attraction in Korea and one of the world’s best water parks.

3. Walt Disney Studios, France – Themed around Disney movies with behind the scenes attractions.

5. Legoland Germany – All the fun of a Legoland park, with amazing creations, rides and attractions.

6. Efteling, Netherlands – Worth visiting simply because it is one of the world’s oldest theme parks.

8. Peppa Pig World, UK – Every little kid’s favourite pig. A must for the youngsters.

4. Magic Kingdom, Florida – Stepping into a magical fairytale land is the experience you will get here, with Magic Kingdom being the most popular Disney park in Florida.

9. Disneyland, California – The original Disney park with Mickey’s Fun Wheel and the California Screamin’ Rollercoaster. This is the best place to meet your favourite princesses too! Read our first time Disneyland tips to make the most of your visit.

11. Canada’s Wonderland, Canada – Not quite USA, but Canada’s largest with 16 roller coasters.

12. Six Flags Magic Mountain, California – 19 rollercoasters, with the record for the most in one theme park.

16. Schlitterbahn, Texas – Water park that was the world’s first water resort from 1966.

17. California Adventure Park, California – Part of the Disneyland Resort theme parks and a must-do when visiting Disneyland for more of your favourite characters and rides. We adore it here! Make sure you visit the new Pixar Pier for the latest attractions and character meetups.

For more Disneyland Resort tips and tricks and tourist traps to avoid during your visit.

1. Atlantis, Dubai – No.1 water park in the middle east, with water slides and sea animals and accommodation.

As we start crossing more of these theme parks off our own family travel bucket list, we will add more detail and any new additions however if there is a theme park missing from this list that you think we should know about, please tell us in the comments so we can add it.

What is the best theme park you have visited?